It’s been a while since I last took part in my favorite game jam, but last weekend, it was time once again!

Radiant Rewind was made for Ludum Dare 47 - an event where you have 72 hours to create a videogame for a given theme. This time, the theme was “stuck in a loop”.

I built this game together with blinry, larkinia and Lena. We used the 2d game engine LÖVE, which was also used for several of our previous game jam entries. 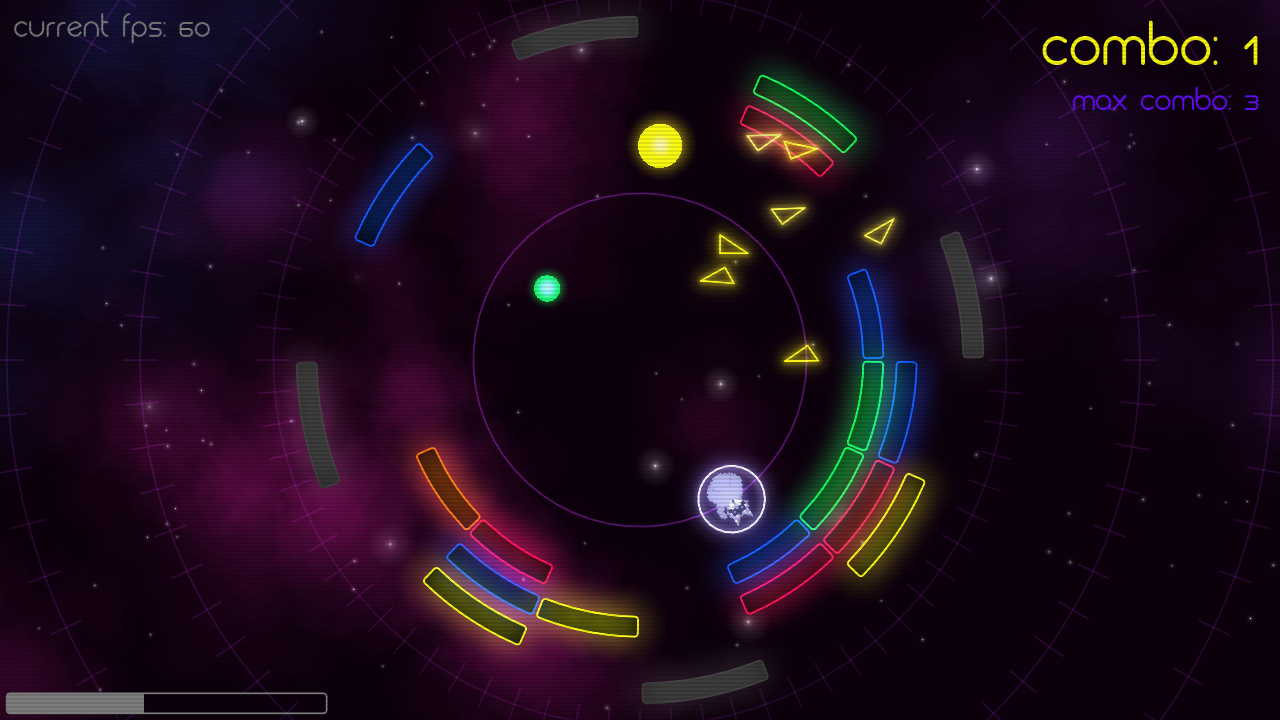 You can also download Radiant Rewind directly here for Windows (64bit) and here for Linux or MacOS. For the Linux/MacOS version, you need to have LÖVE 11.3 installed to play it.

You can also find the game’s source code on GitLab if you’re interested.

The post-jam version has many new features, including:

The full changelog can be found on our ldjam page.

Use your mouse (or other pointing device of your choice) to move along the track. Touch the ball to change its course. Clear all blocks to advance to the next level.

Combos and powerups: Hit multiple same-colored blocks in a row to advance the combo count and unlock a powerup. Then press C to activate it, and do it before you break your combo!

You get multi balls for red, orange or yellow combos, and big balls for green, blue or purple combos.

Time control: Hold ctrl to slow down time for extra precision. Hold space to rewind time. The bar in the lower left shows the amount of time that you can go back. Rewinding time resets your combo count to zero.

(for the jam version)

If you get stuck, you can press 1-6 to jump to levels directly.

If you prefer other controls: The post-jam version has freely configurable key bindings, also including mouse buttons and gamepad support!

As usual, we allowed ourselves to take a lot of time for brainstorming ideas to fit the theme. After agreeing on the basic idea of “a circular breakout-type game”, we started by building a simple prototype of the core game mechanics, and then expanded it with various effects throughout the following days – visual effects like glow, godsrays, particles, animated backgrounds, music (thanks to Kevin MacLeod who provides a treasure trove of free music for games like this!), sound effects (thanks to freesound.org!), and special game-mechanics like time travel, slow motion and power-ups. And of course, we also designed levels and all the other stuff around it like helpful hints, a start screen, etc…

It was fun to see it evolve with its pretty, glowing, rainbow-colored bricks while playtesting and dribbling balls around the virtual orbit as a little raccoon astronaut :)

Randomise User played our game and included it in their compilation video of Best Ludum Dare 47 Games #3: